Home2020 ElectionWarnock, Ossoff would be the Senate version of 'The Squad'
2020 ElectionFeatured

Warnock, Ossoff would be the Senate version of ‘The Squad’ 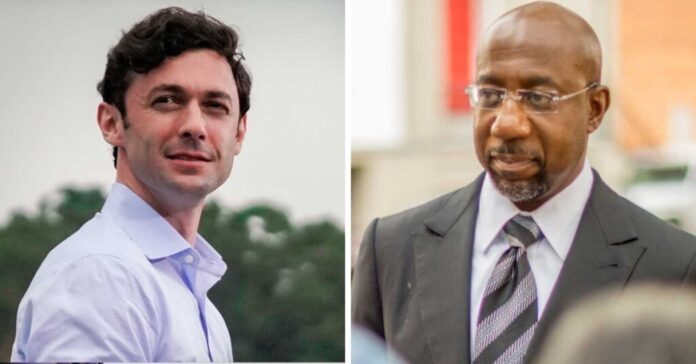 Today, all our efforts need to focus on preventing the far-left radicals that comprise today’s Democrat Party from destroying the country we love.

As the president made clear last night in his rally in Georgia, it’s absolutely critical for the country the reelection of Senators Perdue and Loeffler.

These really could be the most important Senate elections in recent memory, at least in my lifetime.

A 50/50 tie in the Senate will ensure an all-out assault on our freedoms, our economy, and our Constitution, including our Second Amendment and our religious liberty in the First Amendment.

While Republicans been engaged at times in pointless circular firing squad routine, Democrats, they were busy registering new voters and ramping up interest in the runoffs. In normal times, Republicans usually fare better in runoffs, but these are not normal times. This is why a MEGA TURNOUT is imperative today.

Now, will the RNC deliver at the polls? We’re going to find out just how good their organization is. But I will tell you this. This is no time to sit on the sidelines or to stay home and complain and moan about how unfair everything is or how lame Republican state officials are. Set it all aside and keep your eye on resisting the rise of the rabid socialists, who will run you over while they will enrich Wall Street and China.

Everyone needs to get out and vote, not just you go out and vote, you need to get like 10 other people to go to the polls with you today, vote like your life depends on it because it does.

Now, what we must guarantee going forward, are that elections are going to occur that all Americans trust.

Remember, the president said this last night, it’s normal to be dejected and demoralized when you lose at the ballot box, when your party loses, but it’s not normal for tens of millions of Americans, Republicans or Democrats, to think that an American presidential election is rigged or the declared winner is illegitimate. In 2016, the Democrats said “Trump was illegitimate,” now we have conservatives saying that “Joe Biden is illegitimate.”

So conservatives today must fight for election integrity at all costs.

You’re only going to get that if you get Leffler and Perdue in office. Otherwise, forget it, it’s out the window.

Now for the life of me, I don’t know why Senator Lindsey Graham, who is a great friend of this show, didn’t immediately convene hearings on the presidential race.

What happened? All the affidavits that we saw.

We need elections, whose outcomes leaves zero doubt in the minds of fair-minded people. This requires a complete review of irregularities and allegations of voter fraud that were rampant in this election. This will not be completed. I don’t care what anyone tells you before January 20th, but it is nonetheless essential to undertake if Republicans are ever going to win an election again. So my question is, why would Democrats object to a review of the election if they’re all confident, why did they reject?

We can’t allow the frustration of this moment and the fury that so many of us have with what all went down in November to rip apart the movement that the president said last night, and he’s absolutely right, will come roaring back in 2022 if we play our cards right. No president, not in my memory has ever fought harder for American workers, American manufacturing, the American tradition, our way of life than Donald Trump. Meanwhile, Biden and his puppeteer’s, have to be resisted every step of the way on China, on immigration, on climate change, on these obscene and abusive rolling lockdowns that do not work on the coming immunity certificates, on reparations, new taxes, even force gun buybacks. The Democrats want all that.

Today, you can change America.

Remember, they didn’t like the old normal, they want the new normal, they can change America, that’s why we must resist and we must fight where we can truly make a difference. We have a party that’s more diverse than ever and it’s growing. Our policies work, so don’t give in to despair, that’s just the devil’s work, trust God. Also, just think of what the Democrats were willing to do to get power back after 2016, only we won’t have to cheat and lie to win it back. We’ll do it the old fashioned way, we’re going to fix what went wrong and double down on what works.

This is a transcript from “The Ingraham Angle” on January 4, 2021. This copy may not be in its final form and may be updated.