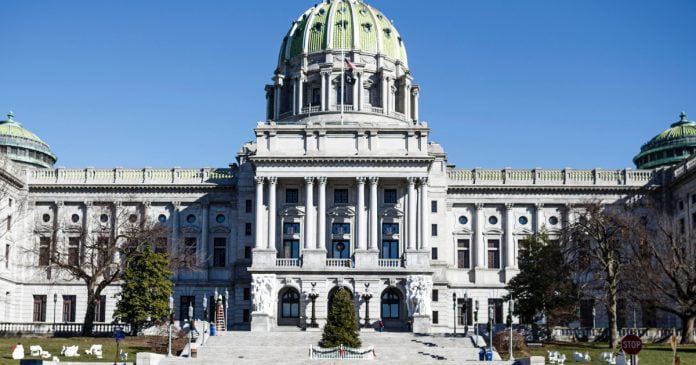 Senator Doug Mastriano, the Chair of the Intergovernmental Operations Committee of Pennsylvania State Senate on Wednesday sent letters to several counties requesting information and materials needed to conduct a forensic investigation of the 2020 General Election and the 2021 Primary.

Below is an Op-Ed from Mastriano explaining the reasons behind this forensic investigation.

A forensic investigation of our election results and processes for the 2020 General Election and the 2021 Primary will go a long way to restore trust in our system. Voting is the fundamental right of all citizens. We should continually look for ways to improve the voting process to ensure every voice is heard.

Today, as Chair of the Intergovernmental Operations Committee, I issued letters to several counties requesting information and materials needed to conduct a forensic investigation of the 2020 General Election and the 2021 Primary.

We have asked these counties to respond by July 31st with a plan to comply. The counties represent different geographical regions of Pennsylvania and differing political makeups. Some are Republican while others are Democrat, which means that this will be a balanced investigation.

The Intergovernmental Operations Committee is a standing committee of the Pennsylvania State Senate with oversight and investigatory responsibilities regarding activities relating to or conducted between two or more governments or levels of government, including the administration of elections across the Commonwealth. As set forth in Pennsylvania Senate Rule 14 (d), each standing committee is empowered with the authority to inspect and investigate the books, records, papers, documents, data, operation, and physical plant of any public agency in this Commonwealth, including county boards of elections.

This is necessary as millions of Pennsylvanians have serious doubts about the accuracy of the 2020 General Election. A January poll from Muhlenberg University showed that 40% of Pennsylvania voters are not confident that the results of the 2020 Election accurately reflected how Pennsylvanians voted. Discounting or mocking their concerns is neither an answer nor proper in this constitutional republic.

During debate on election reform a couple weeks ago, some of my colleagues regrettably dismissed these poll numbers as an inconvenient truth and went on to assert that the only reason there is distrust in our election process was because of the “conspiracy theories and lies” from those they disagree with politically. This sort of ad hominen attack does nothing to address the concerns of millions of voters.

The case for a forensic investigation of the 2020 general election is evident to any unbiased observer.

This was the first election in Pennsylvania with “mass” mail-in voting. In 2020, there were 2.7 million ballots cast by mail and absentee compared to about 263,000 absentee ballots cast in 2016. Many of these ballots were counted at offsite locations with little outside observation or oversight. Furthermore, mail ballots without signature verification were permitted to be counted across the Commonwealth. And, of course, all of this transpired in the midst of Covid-19 where uncertainty and fear impacted the conduct of the election.

Additionally, in the weeks leading up to the election, the Department of State repeatedly altered the manner in which Pennsylvania’s election was conducted. Those who voted in person were held to a higher standard than those who mailed in their ballots. Signatures required for mail-in ballots were rendered meaningless as the PA Supreme Court ruled that ballots could not be rejected based on an analysis of the voter’s signature.

On September 17th, the PA Supreme Court ruled that counties had to count ballots received up to three days after Election Day. A week before the election, the Department of State told the U.S. Supreme Court that ballots received after 8 p.m. on November 3rd would be segregated. But the department changed the rules two days before the election and directed counties to canvass those ballots upon receipt. The U.S. Supreme Court had to step in and order the counties to segregate the ballots.

Just hours before the polls opened on November 3, the department changed the rules again by providing late guidance on how to help voters whose mail-in or absentee ballots were incorrectly completed. The “guidance” resulted in inconsistent application across the Commonwealth. Some counties contacted voters as directed while others did not. There was no basis for that guidance in current or case law.

It would defy logic to assume that an election with the kinds of drastic changes we saw in 2020 was run perfectly with zero errors or fraud.

Governor Wolf and the Secretary of State refused to conduct any type of thorough investigation despite the concerns of millions of our citizens in the aftermath of the election and hundreds of affidavits alleging firsthand fraud, irregularities, and illegal behavior witnessed at polling places.

The closest thing to an investigation we got was a small so called “risk-limiting” audit which consisted of a sample of only 45,000 randomly selected ballots from the November Election. Not nearly the type of investigation that was needed to determine any fraud, misconduct, or technical anomalies. This audit was conducted by the Department of State and did not include public input or outside observers.

Election process problems were not limited to 2020. During the May Primary, multiple poll locations ran out of their supply of ballots. This occurred even though counties are required to print at least 10% more ballots than the highest number of votes cast in any of the previous three municipal primary elections. In some precincts, voting machines improperly labeled the headers of Republican ballots as Democrat while the GOP races still appeared. In one county, a “printing issue” caused both Democratic and Republican ballots to be rejected. These errors occurred in a lower-turnout election, where mistakes should be least likely to occur.

A full forensic investigation is critically necessary for our Commonwealth for the sake of transparency and accountability. There is nothing to fear if there is nothing to hide. Those who have concerns about the integrity of the 2020 and 2021 election will have those concerns investigated and hopefully addressed. Those who think that there was zero voter fraud, no irregularities, and that the elections were conducted perfectly will have the chance to be vindicated.

This investigation is not about overturning the results of either election. The goals are to restore faith in the integrity of our system, confirm the effectiveness of existing legislation on the governance of elections, and identify areas for legislative reform.

In light of the governor’s recent veto of a comprehensive election reform bill (HB 1300) and the refusal of his administration to seriously address the concerns of millions of our citizens, it is incumbent for the legislature to exercise its oversight responsibility.

The people of our Commonwealth should have confidence that their vote counts. It takes accountability and transparency to ensure that our elections are free and fair.