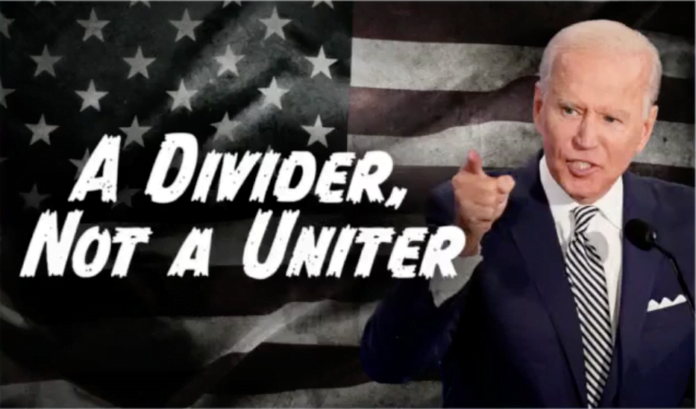 Joe Biden wants you to believe that he’s a uniter, not a divider. And he used that line repeatedly on the campaign trail. Now trafficking in his usual cliches and bromides, Biden urges us to come together as a nation to be kinder to each other. It’s so sweet, really.

“It’s time to put away the harsh rhetoric, lower the temperature, see each other again, listen to each other again. I pledge to be a president who seeks not to divide but unify, who doesn’t see red states and blue states only sees the United States,” said Joe Biden.

Well, lowering the temperature, putting away the harsh rhetoric… is such a nice thought, but does Biden really want to unite the country?

To do so, it would require that he show goodwill and some respect to Trump supporters. After all, a Biden presidency has no hope of being successful if more than seventy four million voters feel disrespected or even despised by the political and cultural elites that make up his administration. By naming Xavier Becerra as his choice to head up HHS, Biden has declared war on conservatives. If confirmed, well, he wouldn’t just be the most radical HHS secretary in history. He’d be one of the most radical cabinet secretaries in history.

As California’s attorney general, Becerra as a hard core leftist, pushing gun control, sanctuary cities and, of course, climate change policies, he was so rabidly pro-abortion that he even targeted his state’s crisis pregnancy centers. Thankfully, the Supreme Court smacked him down.

Now, if Biden had any real interest in cooling off rather than igniting the culture wars, there are things he could do that don’t conflict with true liberal thought. He could take a principled stand against the cancel culture, maybe go to Harvard, I don’t know, push for more intellectual diversity on campus. He could go to El Paso, Texas, and talk about the rule of law and why it’s the responsibility of the executive branch to enforce all immigration laws currently on the books. Biden could also deliver a speech from the Oval Office to discuss the importance of the Constitution and the Bill of Rights. And in it, he could pledge to oppose an effort to pack the court, to add new states, to quash the free speech of his political opponents or otherwise do anything that would undermine our traditional rights as Americans. Biden could make clear that he generally opposes lockdown’s and understands that they infringe on our constitutional rights. He could further stipulate that shutdowns are a last ditch measure to be used only in emergency, true emergency situations. At a minimum, he could demand that all schools be open to in-person learning, period, no exceptions, because teachers are essential workers and they have to show up or find a new job.

Now, how else could Biden be a calming influence?

Well, he could say that while he strongly disagrees with them, he knows that Trump supporters love the country, that pro-life Americans aren’t anti women, and that Antifa and other violent street movements have no place in this nation. But Biden is not going to do any of that because he’s tiptoeing right now around the far left. He’s more afraid of upsetting them than alienating the more than seventy four million Americans who turned out for President Trump. And as long as conservative Americans believe that President Trump is the only person standing between them and tyranny, well, they’ll remain fiercely loyal to him. They believe Trump is one of the few who actually fights for their values and for their families and in watching everything that’s going on right now. Who can blame them?