HomeOpinionBirds of a Feather: Biden and Trudeau are Two Peas in a...
FeaturedOpinion

Birds of a Feather: Biden and Trudeau are Two Peas in a Tyrannical Pod 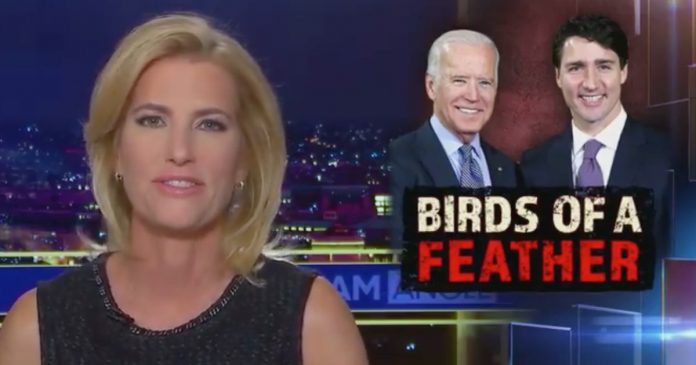 U.S. President Joe Biden likely would have taken the same steps as Canadian Prime Minister Justin Trudeau – who exerted emergency powers to freeze political opponents’ bank accounts and instructed law enforcement to crack down on protesters – if he hadn’t been blocked by courts and Republican governors earlier in the pandemic, Laura Ingraham said Monday.

“Birds of a feather: Two men 29 years apart in age — one just turned 50 — kind of the political pin-up boy of the socialist set and the other 79 and closer to a grandfather you visit in the memory care unit,” she said. “But the similarities between these two leaders and their political parties are striking. First, they’ve both abused their COVID powers.”

Ingraham: Lessons From Up North

“Biden’s vaccine mandates, which have been repeatedly blocked by our courts, have caused chaos across our economy and throughout the military. Even these mandates have made the shortage of health care workers in the United States even worse, and our children have been harmed beyond measure by Biden and his party’s slavish devotion to the anti-science demands of teachers’ unions,” Ingraham added.

“If Biden could be as Draconian as Canada, he would have, if it wasn’t for the Republican-led states that ended lockdowns early and rejected a lot of these COVID mandates.”

To the north, Trudeau has found fewer legal setbacks but has faced similar popular protest for his own often arbitrary and “nonsensical” vaccine and testing requirements for trades like trucking and hauling, she said.

“In both countries, regular working-class people, they’ve just been pushed too far by the elites who truly seem to just enjoy bossing them around. And the growing support for parents rights here and the truckers rights up north have brought out the worst in both leaders:

“According to the Biden DOJ, a mom who is just passionate about keeping her child’s school open and speaks out against idiotic mask rules even for outdoor sports, … she’s kind of like the new Al Qaeda. Our own FBI sees her as a bigger threat than the criminals running wild in the city streets or the cartels and human traffickers operating seemingly now with impunity on our southern border.”

In Canada, Ingraham added, Trudeau has counterintuitively described protesters, including Sikh immigrants and other minorities, as White supremacists, earning derision from Conservative politicians in Parliament.

In one instance, he responded to a Jewish female MP’s critique by claiming she is “standing with people who wave swastikas“.

“The most chilling aspect of Trudeau’s response, though, was the crackdown on individual bank accounts and other digital currency. No court orders whatsoever. The local interim police commissar says clearing the streets, though that was just the beginning,” she said, referring to a declaration by the new Ottawa Police Chief Steve Bell.

She added that 100 or more U.S. attorneys are still working to prosecute suspects from the January 6 Capitol riot, despite the fact many to date have been charged with misdemeanors like “trespassing” or “parading” in a federal facility.

“Many are employed, have stable family and community ties, and many are military vets, according to the records. The more unpopular, though Biden and his policies become, the more he and the Democrats return to Jan. 6. They’re even reinstalling the fencing around the Capitol,” she said.