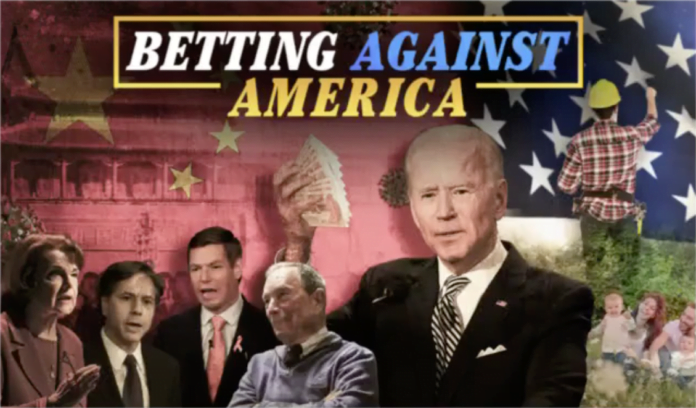 For most of its history, the United States has been the great champion of freedom, not only for Americans but for the oppressed people around the world. And even when we were too small to make much of a difference outside of our own borders, we just never accepted the idea of tyranny.

But now we’re the richest and most powerful country in the world, at least for a few more years. And our elites, they love to talk about the importance of America’s leadership on issues such as climate, fighting hunger, poverty and, of course, human rights. But come January 20th, 2021, America’s voice will stop calling for freedom, at least where China is concerned.

Secretary Mike Pompeo’s blunt criticism of the CCP will likely be the last of its kind that we’re going to hear from the US government for at least four years.

“The Chinese Communist Party wants what we have and they will do whatever they must do to take it and get it. They will steal our stuff, they will pressure critics of the Chinese Communist Party to keep quiet. They will do whatever it takes if we don’t educate ourselves, if we’re not honest about what’s taking place. We’ll get schooled by Beijing,” stated Pompeo.

For many of us, this represents a sad change that we’re not going to hear speeches like that, it was a phenomenal speech, hardly got any coverage. Now, remember, as recently as this summer, the protesters in Hong Kong, were waving American flags. Why? Because they knew as people struggling for their own freedom, what people like that have always known, that we were on their side.

But many of the donors who supported Joe Biden’s campaign, they were not on the side of the Hong Kong protesters. Men such as Mike Bloomberg, he sees China as a new market, not as a grave threat to America’s economic or military preeminence. So when Bloomberg hosted a new economy forum a few weeks back, which Chinese voices did he decide to feature? The Chinese CDC s top epidemiologists, a man who doesn’t understand or care about the West’s love of freedom.

“In the eastern culture, we have a community value [that] is higher than the individual value in the United States and European countries, the personal right. It is a top priority. The most important is everybody takes the order and to follow the instruction,” said China’s head epidemiologist.

Well, the men who run the CCP are thrilled that the Biden administration has adopted that notion of community values and are insisting that Americans follow instructions, follow orders.

Every Chinese official knows that Biden’s victory was a huge victory for the CCP, and that our new leaders will worry more about offending President Xi than standing up for American workers.

Unfortunately, most of the elites in this country are on China’s side.

The Bush administration was always proud of its record on human rights and claimed to stand for freedom, but was usually strangely muted when it came to what China was doing.

Then the Obama administration, of course, they did nothing to stop the rise of the CCP. And now Biden, he intends to follow that same path. And actually, Biden’s advisers have a proven track record of advancing the CCP’s interests. Biden adviser Steve Ricchetti was a key player in establishing permanent normal trade relations with China back in 2000. Jake Sullivan has called for more cooperation with Beijing and even appeared on Chinese state TV 2017 to bash Trump.

Biden’s nominee for secretary of state, Tony Blinken, his own consulting firm helped American universities, court big, big donations from Beijing. So do you really expect him to counsel Biden against letting the CCP continue its conquest of higher education? Well, he wouldn’t want to deprive his old clients of lucrative new funding now, would he?

The fact is the tally of gifts and contracts from China to US universities since the start of twenty thirteen is now approaching one billion dollars, with the largest share going to Harvard University, which pulled in 93.7 million, the majority as gifts.

The Chinese aren’t just pumping money into these elite institutions, but colleges across the board, USC and U. Penn, home of the Biden center, have been showered with millions in Chinese gifts. Now, universities and researchers that used to be accountable to Americans are instead hooked on Chinese cash and allowed to bring in roughly 370,000 Chinese students every year.

Staggering. It’s a handy way of getting spies into the country. As Congressman Eric Swalwell learned, the Chinese spy who infiltrated his campaign was enrolled at California State University. He and Dianne Feinstein show how easy it is for China to get our elected officials to embrace their spies. Literally, yes, and figuratively.

Just as shocking is the recent news of China’s one hundred and forty thousand acre land grab and Texas… weird. It’s conveniently located near Laughlin Air Force Base. The Chinese company that secretly gobbled up the land says it’s going to build a wind farm. Why should we trust them? Especially since its parent company is owned by, quote, a former Chinese army officer and the rich and richest person in China’s embattled Xinjiang province, where they’re shoving Muslims into concentration camps.

Of course, the Chinese would die of laughter if a former US general tried to buy land near one of its own army bases or Air Force bases, but most of our lawmakers don’t care. There’s zero reciprocity. We can’t do what they can do in our country. Why? Well, maybe they’re a little smarter on those issues than we are now.

In the late 1970s, the United States had another president who wasn’t interested in defending our national interest and who took every weak position possible on the world stage. And under his leadership, America was not taken seriously. Our enemies were gaining strength all over the world. His name was Jimmy Carter. He became a symbol of American weakness and ineptitude. Biden’s likely headed for the same place in our history, but America does not have to follow him.

Even now, all Americans who care about liberty, including Republicans in Congress, should be warning about the dangers from the CCP.

There’ll be a lot of muscle-flexing by China in the coming months, and the ground will shift away from liberty as country after country puts out its tin cup post-pandemic. They’re going to be looking for rescues. And I’m telling you, China will be happy to oblige. But any aid package will come at a steep price, like requiring countries silence on human rights abuses and on China’s aggressive moves in places like the South China Sea. And keep your eye on Taiwan, many China experts think they’re the next to go. The United States has a commitment to them. But does anyone actually believe Biden is going to prevent China from rolling in and taking control there in Taiwan?

The only way I can see Team Biden stepping in would be, I don’t know, maybe to urge Chinese troops to wear masks and protective gloves to help stop the spread of covid as they round up the dissidents.

This is a transcript from “The Ingraham Angle” on December 15, 2020. This copy may not be in its final form and may be updated.