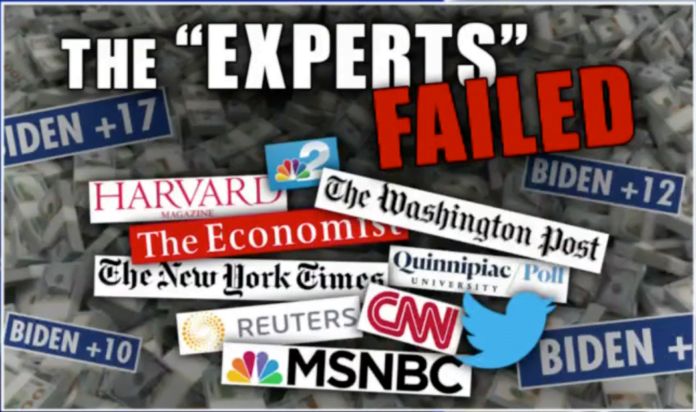 A lot of conservatives are in distress, and I don’t blame them for what they’ve seen over the past twenty-four hours, and the past 10 months, from the propagandistic media, the lies, the smears against this president, and a swirl of controversy surrounding the mail-in ballots.

But the fact is, with this populist conservative message of Donald Trump, Republicans managed to flip at least seven seats in the House. And it looks like they’re going to hold on to the Senate. So whatever happens with the presidential race and we want every legal vote counted, I think there are some main takeaways I want. These are mine. I want to get to them.

Number one, the GOP outperformed and the experts failed miserably. Now I’m talking about all the fat cat consultants and the pollsters who cashed in, yet crashed spectacularly. Now, I’ve been telling you all along that the people who are neither experts nor trustworthy somehow get all this airtime. They should all go into another line of work, however, and we should not give most of them the time of day ever again.

I think a flashback is in order, don’t you?

So the billionaires and all the big bankers backing these Democrats, they don’t know the country outside their own liberal metropolitan areas. They don’t know it at all.

Republicans did much, much better than nearly every expert predicted.

But no group failed as spectacularly as the grifters at the Lincoln Project. They’re all supposedly former Republicans, all of them hacks funded by wealthy liberals. They didn’t move a single vote away from Donald Trump. Trump garnered 63 million votes in 2016 and already close to 68 million, despite enduring years of attack. So 68 million votes in 2020. Yet the media slavishly elevated these hateful people from the Lincoln Project.

Now, David Brooks, not a Trump fan, was exactly right today. He tweeted: “Our job in the media is to capture reality so that when reality voices itself, like last night, people aren’t surprised. Pretty massive failure. We’re still not good at capturing the right word half of the country and it is half the country.” Kudos to Brooks for admitting that.

Now the hundreds of millions shoved into futile Senate and House campaigns, hundreds of millions of dollars worked out great for the political admen. Remember, they always make 20 percent. But how did that work out for the Democrats? Well, it’s unreal that the Dems fell for these frauds again and again.

Number two, the president is still fighting for every legal vote and for a fair process.

Now, last night I spoke to the president directly and personally about this, and he is committed to ensuring that there has been a complete and accurate account of each legal vote in each state that hangs in the balance.

So all day long and late last night, the media, of course, they were itching to declare a Trump win, a numerical impossibility. So, in other words, that can never happen.

Now, it might be the case that Donald Trump ends up losing. It might be. But conservatives were rightly irate last night at how slowly Trump’s wins were declared in states like Florida and Texas by the media. I shared that frustration.

I trust that the Trump campaign and his lawyers will do the right thing and all of these challenges.

The president was right when he questioned mail-in ballots all those months ago. They undermined the public’s faith in the result because of this late counting. And what we know tonight, looking at what’s going on in Philadelphia, does it remind you of what happened in Palm Beach County back in 2000? I don’t know, maybe it’s all one hundred percent buttoned up, but we’re the world’s leading democracy and we can’t declare a victor on election night? That is absurd and it’s toxic.

Number three, the Democrats extremely fragile coalition. Now, it may seem like things are all coming up roses right now for Joe Biden. Oh, don’t you want to be Joe Biden? But that’s a facile analysis. The Democrats coalition is not sustainable. It consists of hard-left progressives, plus the multinational corporations that want to ship your jobs overseas. Now, the squad won last night and they won easily, Pressley, Ocasio-Cortez, Tlaib, and Omar. Do you think, that they’re going to be content with the donors who push against more covid lockdown’s, and that they will compromise with the Republicans in the Senate, and they’re going to be all on board with that? Not likely!

Meanwhile, in this election, Republicans demonstrated that they have a fantastic and increasingly diverse base of supporters. Trump lost Star County, which is the most Hispanic county in the whole country, by 60 points in 2016. He’s only down 5 points this time around. That’s a fifty-five point improvement.

Ingraham: A second Trump victory would show America ‘belongs to all of the people, not just an elite few’

In the neighboring Zapata County. He won by 5 points. Hillary won that county by 33 points in twenty sixteen. Do the math there. 38 point swing toward Donald Trump. And it wasn’t just Texas. Trump won more nonwhite votes than any GOP presidential candidate in 60 years.

They’ve called Trump a racist. Remember, they called him a xenophobe, anti-Latino? It didn’t work.

The model is Florida, where Rick Scott, Ron DeSantis, and Marco Rubio built a dynamic coalition with a conservative populist message that’s anti-China and pro-worker. They brought in farmers and suburbanites together with Hispanic voters. Now, the question is how to expand this and replicate it up, up and down the East Coast and then across the nation.

From this day forward, Republicans need to focus on building a 50 state coalition no more, starting in the hole with all of New England, California, and New York. No, no, no. The campaign for 2022 starts now.

Number four. Whatever happens, Donald Trump is the current and future leader of the Republican Party, certainly at least until someone else comes along with his stamina, charisma, and drive.

No one else could have done what he’s done. He’s taken the ideas of economic populism and demonstrated in practice that they work, they raise up wages, they bring more prosperity, and certainly worked on the peace front.

It would have been a lot easier for him to sell us all out to Wall Street, but he refused to do that. And the crowds that turned out to see him, I met so many incredible patriots over the last few months, just remember this. You’re going to be able to tell your kids and your grandkids, that at one point in time we had a president who fought for the little guy. And they threw everything at him, and at the end of it, he still grew support for his movement. In fact, he currently has two million more votes than Hillary got in twenty sixteen.

This year’s presidential election is still too close to call, not the outcome that the so-called experts anticipated. But they’ve been wrong a lot during these last four years, and I expect them to keep getting it wrong during the next four as well.

Meanwhile, we’re going to continue to spread President Trump’s message of fairness, freedom, and economic opportunity for average Americans. We’re going to stand up to the hard left ideologues who despise this country and its people. We’re going to resist plutocrats who want to rig the economy in their favor and maybe even the elections. And we’re going to fight for our traditional values and defend our American heritage.

We are an army of tens of millions of Americans, and we intend to take our ideas to every state in this country. And if we can continue to grow this movement and I believe we can, and the Democrats bumble along with their current leadership, then four years from now, we’re not going to have to be sweating it out with recounts and legal challenges and mail-in ballots. We’re going to be celebrating a landslide victory.