HomeNewsOur first move for an Iran strategy: a like-minded states summit in...
FeaturedNewsOpinion

Our first move for an Iran strategy: a like-minded states summit in DC 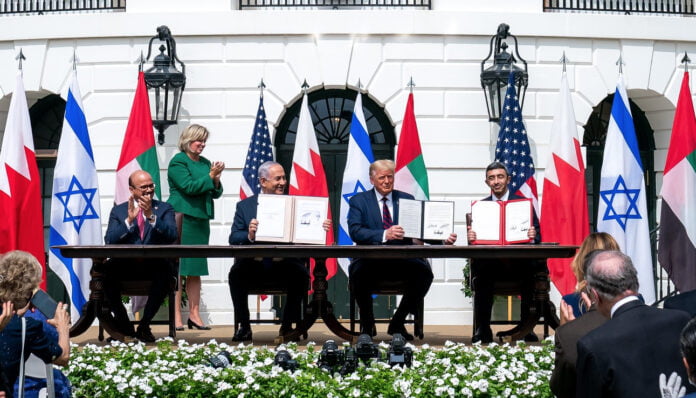 We recently marked a decade since the end of what was initially called the Arab Spring with rebellions against the oppressive Arab regimes in the Middle East. Despite the romanticism attached to the Arab Spring, not much altered and Arab democracy remained out of reach.

Fast forward to 2015. The Islamist military terrorist group ISIS controlled large areas of Syria, Iraq, and Africa and threatened to establish a murderous Islamic State. The region was in disarray. It was during this time that the US-Iranian nuclear deal (JCPOA) was signed unleashing billions of dollars on a regime intent on increasing terrorism and aggression in the region and beyond, and fueling an already unstable and volatile region.

Today the region has changed again. This time we are heading in the right direction, towards peace and stability. We credit the Trump administration for their out-of-the-box thinking and historic initiation of the Abraham Accords. Many of the regions’ moderate Muslim countries have partnered with Israel and the US over the more extreme Arab nations. This is a concept that was unthinkable a decade ago. To date, Israel has welcomed normalization agreements with the UAE, Bahrain, Sudan, and Morocco. We anticipate other countries participating in what is becoming a sought after regional peace initiative.

We credit the Trump administration for their out-of-the-box thinking and historic initiation of the Abraham Accords. This is a concept that was unthinkable a decade ago.

This Middle East “Peace Club” did not happen by chance. Its members overturned old paradigms that no longer fit nor served their citizens and forged a new way forward, one that involved mutual respect. They realized that Israel is not the existential enemy. Unlike the myth that is consistently perpetuated, many now know that their real enemy is Iran.

How have they come to this realization? They see that it is Iran, not Israel, who instills fear and terror that strikes at the heart of neighboring Arab countries. It is Iran who for decades has waged continuous war against Israel, the US, moderate Arab nations, and democracies. It is Iran, not Israel, who spreads its terrorist proxy groups across the region and who has killed, bombed, maimed, kidnapped, and tortured the vulnerable and the sacrosanct including citizens, embassies, and diplomatic personnel. Last year, Iran, unprovoked, attacked the state-owned Saudi Aramco oil processing facilities in eastern Saudi Arabia leading to global financial market destabilization. Most recently an Iranian journalist, Rouhollah Zam, was hanged in Iran for speaking against the regime. Their response to the recent UAE-Israel peace agreement is also telling. Iran’s president, Hassan Rouhani “warned the Emirates” that if the “Zionist regime steps in…things will change, and they will be dealt with in a different way.” Today, no one is blinded as to the real intentions of the Ayatollahs and their vision of the Middle East which is one of terror, oppression, fundamentalism, poverty, and fear.

The nuclear Iran deal, or JCPOA, was perhaps constructed with good intent but we all now realize it didn’t work. The Iranians broke the deal from its very beginnings. The IAEA recorded their transgressions which were ignored by the deals’ signatories. Undeterred, Iran continues to break the deal on an ongoing basis and now has more than twelve times the amount of enriched uranium permitted under a 2015 nuclear deal. The IAEA also stated that Iran was continuing to enrich uranium to a purity of, most recently, up to 20% following their previous transgressions of 4.5%. This is in violation of the 3.67% threshold agreed under the 2015 deal.

Significant loopholes of the Iran nuclear deal were also revealed. These included the Sunset Clause which brought the deal to a close in 2025, the lack of transparency on research and development at universities and in existing nuclear sites, and the inability for spot inspections due to the permission of a 30 day warning period prior to any inspection.

Subsequent maximum pressure sanctions imposed on Iran by the US tangibly assisted in weakening the country. Its real GDP contracted by 6.8% in 2019/20 and its oil sector shrank by 38.7%. We now have significant leverage and a diminished Iran that will likely be willing to take a seat at the negotiating table.

There is no doubt that the Iranian issue is the most pressing issue facing the incoming administration. We must recognize that the Middle East of 2021 is not the Middle East of 2015. With Abraham Accords’ growing circle of peace, we must avoid the continued failed patterns of the past and work together to maintain the momentum which encourages peace and prosperity. The world, as well as Iran and Hezbollah, must-see Israel, the United States, and the moderate Arab states as united. We must never provide the Iranians with the sense that the achievements of recent years can be rolled back.

What must happen now? The first step is to talk. Let the US and all the like-minded countries of the Middle East meet at a Summit in Washington DC to discuss strategies. We are all aligned in our ultimate strategic goal – that of preventing Iran from developing nuclear weapons and exporting terror and instability. What we must now discuss and agree upon is the method to achieve this goal.

The volatile Middle East of 2015 has moved on to become the calmer Middle East of 2021 which presents a promise of peace, economic growth, and security. If we stand together and unite in our goals we can contain the terror in our midst and make our dream of a stable, flourishing, and free Middle East a reality.