HomeCulture WarsBiden's Calls For 'Unity' Amid Divisive Agenda Will Only Unify The 'America...
Culture WarsFeatured 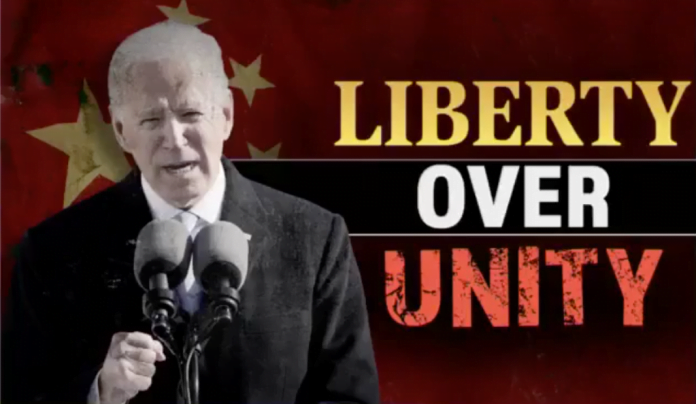 In her “Ingraham Angle” monologue on Wednesday, host Laura Ingraham said that although President Biden continues to preach “unity”, he is at the same time setting the stage for that “unity” to occur on the other side of the political divide from him.

Ingraham warned that behind Biden’s calls for unity, including in his inaugural address, has been and will likely continue to be divisive rhetoric and profound apologies for American exceptionalism.

“Liberty over unity, that’s the focus of tonight’s ‘Angle,'” she said, adding that while CNN hosts fawned over the many “firsts” of the day — a now-former president departing early for his post-presidential home, the first vice president of Black and South Asian descent, and so on, they overlooked China’s state newspaper having its own first: a front-page headline of “Good Riddance … Donald Trump.”

She also pointed to pro-Biden Democrats like Rep. Katherine Clark of Massachusetts declaring Trump an inflamer of “hate, anti-Semitism and violence” and Rep. Adam Schiff of California repeating the claim that Trump precipitated a “white nationalist insurrection.”

“China couldn’t care less about historic firsts or diversity or Lady Gaga, or her song or performance but they do know with Trump out of the White House, they are poised to soar past the U.S. in wealth, military might, and global influence,” she warned.

“The 2020s will probably be known as the decade where China became the most powerful country on Earth. The CCP is giddy because it knows the American Democratic Party, especially one led by an aging globalist like Biden is not really willing or able to stand up to them or for that matter to stand up for freedom around the world.”

She said that the probability of China’s rise and American decline will echo the worldview of Biden’s Democratic colleagues, who view the “GOP as far more dangerous than the CCP (Chinese Communist Party).”

“They want Republicans to be vetted, surveilled, shamed, and deplatformed. That is the agenda that the CCP can certainly get behind,” she said.

“[H]ow is a nation supposed to unite when one side is essentially calling the other side systemically racist and evil?”

“Biden wants us to unite behind the idea that America is a racist country. No way. What makes America the most incredible country on Earth is not unity or diversity — there’s nothing wrong with that, but the animating principle of America is liberty, freedom,” the host said.

Ingraham clarified that she doesn’t believe Biden thinks the U.S. is a racist country dominated by white supremacists and noted the Delaware Democrat has a history of bipartisanship — but added that in 2021, that same former senator is now “too weak to stand up the Marxists in his party.”

“The reason why they are stopping the border wall is that they want more cheap labor to flood into the U.S. and [then] give the border crashers amnesty — It helps their effort to change America demographically — and they hope politically,” she said.

“The reason they are doing climate change [legislation] is that they think America needs to be restrained and our policies harmonized with other climate policies around the world.”

Collectively, she said, the predictable incremental increase of divisive rhetoric and government actions that hurt the working class and those who don’t entirely agree with Biden will both “reenergize” Trump voters — and further widen the big-tent of Trumpism to other Americans who see the new president and the Democrats running roughshod over their values.

“We are going to stand up without fear and of course without violence but with passion, resolve, and good cheer knowing the facts are on our side even if John Legend and Tom Hanks aren’t,” the host remarked, pointing to two liberal celebrities prominently featured at inauguration festivities.

“Over time as the ruinous and divisive policies and sentiments of the Biden administration sweep across the nation, I predict that millions more will join the America First movement,” the host continued.

“After all, Biden did say he wanted unity. On our side, we’ll have it.”