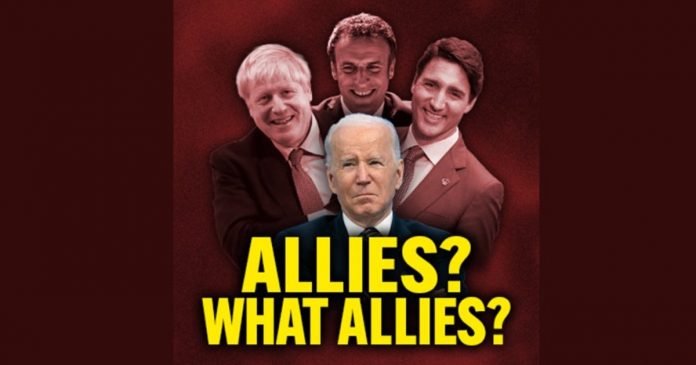 Fox News host Laura Ingraham says the time has come for Republicans to ask themselves: which countries are truly allies of the United States, and which are only allies of the Democratic Party?

LAURA INGRAHAM: Whenever Biden meets with world leaders especially when he is over in Europe, you know America is going to get taken to the cleaners one way or another and today was no exception. During his meeting with the G7, this is what went down. Before Biden even showed up, America got lectured by several of our so-called allies. So France, Canada, and the U.K. felt the need to respond to the Supreme Court’s decision to overturn Roe versus Wade with very sharp criticism.

For Boris Johnson who has single-handedly destroyed the Tory party joining the dog pile on the U.S. for him, that is really rich because he did not tell you that the United Kingdom in many ways has tighter restrictions on abortion than many states in the United States. Because they require two doctors to sign off on an abortion in the U.K. Now, Boris’ critique is a transparent effort to bolster Biden and to appear as a unifier in pushing for more Ukraine aid. Good luck in unifying anyone on that. This is not the first time nor will it likely be the last that our allies in name only have expressed strong opposition to America’s conservative populist movement that Ben was just referencing. Now they hated Trump, of course.

For a lot of reasons but chief among them, was his demand that Europe spend more on their military after decades of essentially what was free riding on the United States. When you remember back on Trump when he would go over there, he is pretty pragmatic. He was unabashedly pro-American and he was consistently blunt. Those are three qualities the Europeans generally loathe about us. Now Europeans prefer presidents who badmouth or apologize for America.