Ingraham: Jen Psaki Is The ‘Queen Of Disinformation’ 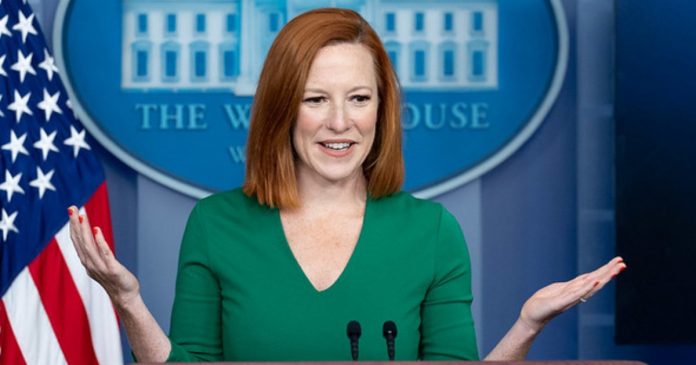 Laura Ingraham blasted the White House on Thursday for pushing Big Tech to crack down on “misinformation.”

White House press secretary Jen Psaki commented on Spotify’s announcement that it will flag podcasts that cover COVID-19. Spotify instituted the policy after fielding criticism for the “Joe Rogan Experience” due to Rogan’s comments on vaccines and inviting guest Robert Malone, who claims to have invented the mRNA technology used for the Pfizer and Moderna shots.

Unlike Democrats, We Have Not Given Up On America

Psaki said Tuesday, “Our hope is that all major tech platforms — and all major news sources for that matter — be responsible and be vigilant to ensure the American people have access to accurate information on something as significant as COVID-19 … That certainly includes Spotify.”

“So claims a woman who exhales misinformation and props up narratives for a living that are false,” Ingraham said.

“Now, as the left continues to press for censorship of independent voices across media outlets, they’re fine with the Chinese Communist Party having full access to its propaganda across America,” “The Ingraham Angle” host continued. “All day long, the CCP tweets through state-run media and dummy accounts. They write opinion pieces and some of our biggest newspapers. They fund Chinese studies, programs across academia. And starting tomorrow night, NBC is going to bless this despotic regime with two weeks of nonstop propaganda.”

“But did the queen of disinformation, Ms. Psaki, call out the coming myths and disinformation?” Ingraham asked before the segment cut to a clip of Psaki saying she is “looking forward” to the Beijing Olympics.

“She’s giddy, beaming. But for all her sucking up, Psaki got a kick in the teeth from the Chinese state-run media, with one outlet saying, ‘Considering that Biden claimed a so-called diplomatic boycott of Beijing 2022, he seems to have a bad memory again.’ Now, obviously, the diplomatic boycott meant no officials would be traveling to Beijing. But you get the point.”

“China sees the Biden White House as weak and stupid, yet the global stage is filled with useful idiots, eager to stay in China’s good graces.”

“Yet as the Genocide Games in China kick off, they are the ones who are on the wrong side of history. They have no problem summoning self-righteous indignation, words of moral condemnation against Joe Rogan or Fox or anti-mandate doctors or Donald Trump, do they? But China, not so much. The ‘Angle’ will never ignore the silent screams of the voiceless. We cannot pretend not to see what’s happening in China.”